Venturing out into the great outdoors during the darker months can be a very cold and wet affair, but when the clouds clear, there’s nothing like an invigorating winter walk. So, to make the most of the good weather, guest poster Jess Cleave has compiled a list of her favourite walks around the South West that are especially beautiful when opportunity strikes and the weather is unseasonably nice. Keep in mind, though, that this is England after all, so always prepare for sudden changes to the weather. 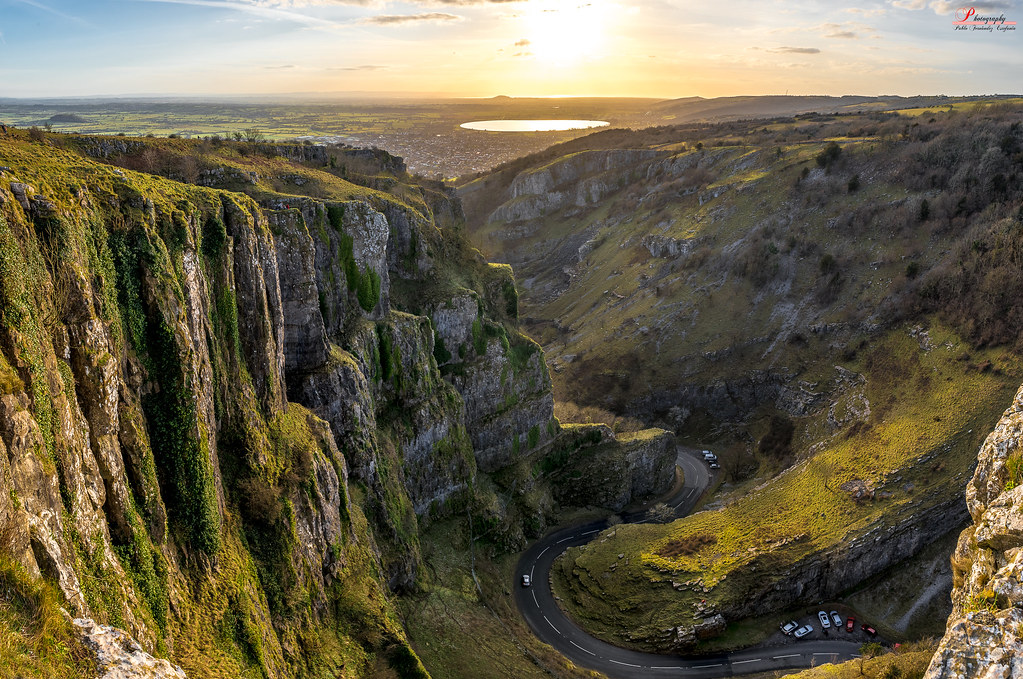 “Cheddar Gorge” by _Hadock_ is licensed under CC BY-NC-SA 2.0

This is first on the list because it’s also home to the famous Cheddar cheese, which is an essential pick-up if you’re in the area. Apart from its culinary delights, I also love this walk for the elevated views the Gorge offers over the Mendip Hills. The route itself is clearly sign-posted and well-trodden but there’s also a tourist guide centre for further information or handy maps if you so desire.

Following the pathways through the gorge, you’re gifted wonderful panoramas over the Mendip Hills, including the Somerset Levels and Bridgewater Bay. If you’re lucky, you might even get a chance to see some local wildlife, such as goats grazing on the lush grass. As it’s an elevated route, I would say it’s a moderate standard as there’s a fair hill to climb to reach the top and then a steep slope back down again to reach the town.

Travel back in time to a landscape of ancient oak woodland filled with rare lichens and abundant fungi. Horner Wood offers a wondrous covered trail through a great British woodland right on the north edge of the southwest coast. Like Cheddar Gorge, this is a Nature Reserve with well-trodden paths that offer a little something for every level. As you make your way through the woodland, there’s also a chance you might see some local wildlife in the form of Exmoor ponies and deer making their way through the luscious rolling hills, perhaps pausing to enjoy a drink from the fresh stream that courses through these woods.

Cornwall boasts a great number of enjoyable sights, sounds and walks, but confined to this list of 10 I shall only include a couple. The Godrevy coast is one of my favourites for the simple reason that I love the sea. From the top of this trail, you can look down on the huge dark blue expanse crashing against the land, which is why Cornwall is such a beautiful part of England.

During summer months, you can stray from the coastal paths to the beach and maybe even go for a swim, although this is not recommended during winter. From the Godrevy car park, you can start the journey north along the coast until you reach Godrevy Point, which presents a great view of the lighthouse situated on an islet. During this time of year, it’s also possible to capture the sun lying low in the sky as it’ll be setting just after lunch; there really is nothing better than a sunset over the sea.

Another picturesque coastal landscape to traverse in the South West is Boscastle. This is the first walk on the list that passes through inhabited areas, allowing you to peruse picturesque houses, shops, shacks and boats! You can see lots of evidence of the historic fishing port scattered throughout the village. It’s a really serene stroll through an area of outstanding natural (and manmade) beauty.

At the southernmost tip of mainland Britain, you’ll find Lizard Point, which offers stunning vistas over the coast and a publicly accessible lighthouse to explore. Again, if you’re lucky, you might spot seals bobbing in the English Channel, or Shetland ponies grazing on the rich flora of the area. This is an area to explore and enjoy as it provides spectacular views over the edge of England.

It’s also an area steeped in maritime history. Numerous trading vessels dropped off their cargo on the south coast and, in some unfortunate cases, the cargo sunk to the seabed as the ships were smashed against the formidable rocks of the Cornish coast. Pistol Meadow (slightly west of Lizard Point) is one such location. It’s supposedly the final resting place for 200 fallen troops who were on board the Royal Anne when it sank after striking rocks.

Venturing east of Cornwall, the remains of Corfe Castle is set in Dorset and more specifically within the scenic Purbeck Hills. This walk, like many others in the UK, feels like you’re travelling through history, as what’s left of the castle dates back to the 10th century. There’s plenty of opportunity to learn about the history of the castle and village in detail when you visit, as the National Trust operates a visitors centre.

The walk from Castle View visitor centre takes you through Corfe village, pauses to explore the castle remains and then continues to Poole Harbour over gentle rolling hills and fields. It’s a fairly long walk but there’s so much to take in that I’d definitely recommend it.

Woodchester Park is the setting for well-maintained and beautiful woodland walk just north of Bristol. This is a great spot for enjoying a leisurely stroll through the secluded Woodchester valley. This is one for a relaxing afternoon as the route meanders through shaded woodland and open fields with grazing animals. The walk takes you past small ponds, a disused dam, a lake with plenty of birds to spot and a boathouse that is now used by bats as a shelter. Woodchester Park is a thoroughly peaceful and charming part of the southwest.

Dartmoor National Park is a great expanse of lush moorland with granite tors jutting out of the ground—a staple of the Great British outdoors. The area offers plenty of opportunities for exploration and discovery, but here I’m going to focus on Wistman’s Wood. This is an area of unique woodland that feels like it’s been lifted straight from The Lord of the Rings; the dwarf oaks’ branches form contorted shapes while the roots stretch out, covering the ground, which itself is coated by over 100 types of lichen and moss. This unusual aspect of the wood has provided inspiration for plenty of art and literature over the centuries and is quite a unique sight to behold.

Dyrham Park is a notable estate set in Gloucestershire that encompasses sprawling grounds, parkland, an enormous country house, a garden and a church. It’s owned by the National Trust and, as such, is easily accessible to the public both for walks around the area and for visits to the house. If you have the time, I’d highly recommend a tour through the house, as it’s also home to great works of art and is, itself, a faithful example of aristocratic life in the 18th century.

The walk is called Prospect Walk and it meanders wonderfully through the estate. Take your time to stop by landmarks such as Hinton Hill, which was an Iron-Age hill fort. Following the path will also provide you with spectacular views over the Severn Valley and, if you’re lucky, views of the Welsh Black Mountains. Prospect Walk and the Dyrham estate really offer a whole variety of sights to enjoy.

Avebury is a World Heritage Site of great historical significance; it’s home to the world’s largest remains of a stone circle and shares its heritage status with Stonehenge, which is a little further to the south (and possible to visit in the same day!). Both are absolutely worth visiting but I’m sharing some love for the lesser known of the two.

Apart from its archaeological significance, Avebury offers revealing walks through chalk downland as you retrace the steps taken by the same ancestors who brought the 100-tonne stones to Avebury in the first place. Following the National Trust path, you will be led through the stone circle, Avebury village and Overton Hill cemetery, which is a burial ground from some 4,200 years ago. Walking around this prehistoric site gives a sense of the scale of the history and mystery surrounding it, as we’re still today uncovering artefacts and learning from our past.

Jess Cleave works for Oak Tree Parks who have over 50 years’ experience in running quality residential retirement parks and owner-occupied holiday parks in the South West of England.

FIND ME ON SOCIAL MEDIA

WHO’S BEHIND IT ALL?